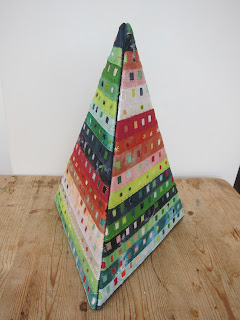 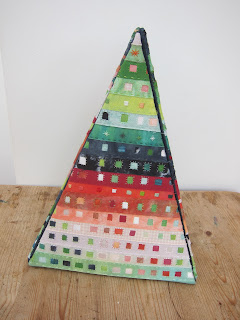 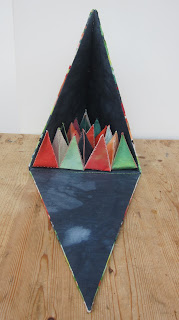 This the inside and outside of the final piece.
Overall I am pleased with it as it is brightly coloured, fit for purpose as a treasure chest. The down sides are that the raw edges to the strips are quite fragile and will need some care. It would not be suitable to be used as a standard toy. I like the dimensions as it is striking and the little pyramids are big enough to house an item. I am happy that this is a close representation of the paper mock up and in particular that the sides have the same strong reinforced quality that stops it looking too floppy. I think it is a good contrast that the little pyramids have a softer appearance.
I tried it with further layers of pyramids but it became very 'busy' and I like the effect of finding little brightly coloured jewels in the bottom of the large pyramid. 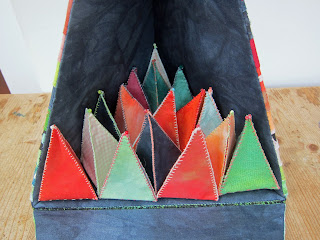 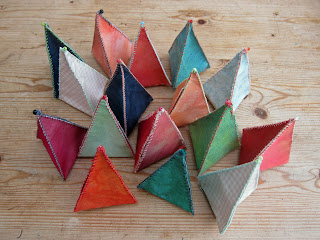 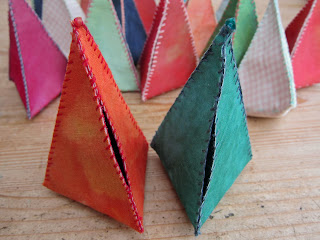 I wanted to create 'pockets' inside the pyramid in which to hide little family treasures for a child to find. Initially I planned to make fabric pockets but I didn't like the effect. In the end I decided to make a number of small pyramids using 2 different layers of the stiffened fabrics. The apices were particularly difficult to finish neatly so I topped them all with a bead or two. Each pyramid measures approx. 8cm high. These fit neatly into the base of the pyramid as each is a geometric fraction of the original. The pyramids have a different colour lining but the photo doesn't show this very well. Each has an opening along one side allowing you to place an object inside. 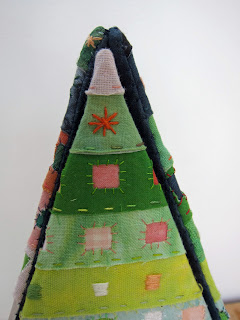 It was serendipity that one of the sides was a little shorter than the others so that when it closed up it fits neatly into the apex made by the other 2 sides and miraculously stays there! 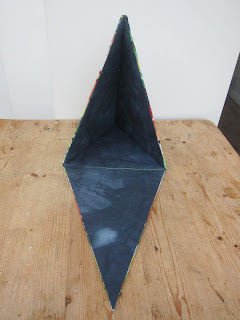 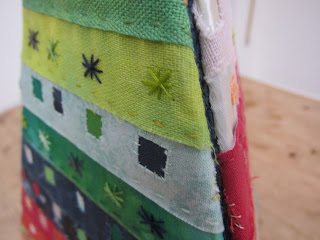 I have decided to use this pyramid as a memory box which I could pay with with children in the family . I wanted to create a container so I joined 2 of the sides using ladder stitch. The blue lining shows as an edging to the side panel as in the paper mock-up 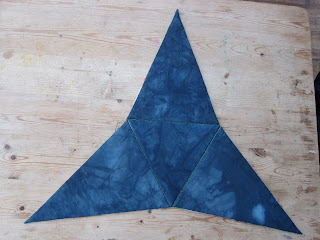 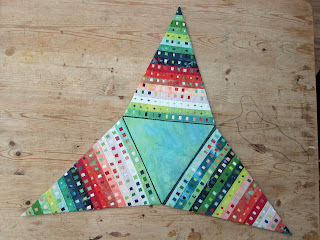 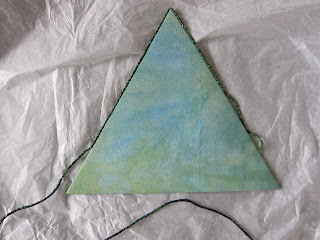 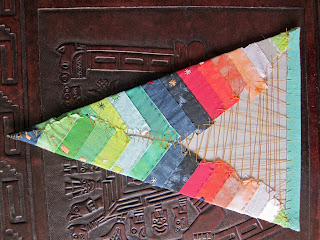 As the seams were too thick with any other technique, I laced the fabric on to the card shapes then applied a dark blue fabric to the reverse as a lining. The base was covered in a plain piece of fabric, edged with a machined cord, and the sides ladder stitched to the base. 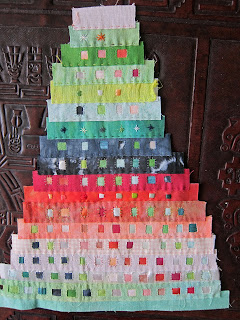 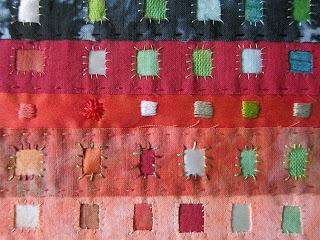 On Sian's advice I increased the size of the pyramid by half again and the completed piece measures 37cm high and 25cm across each side of the base. I made a net and cut card to fit. I made a sheet of fabric to cover each piece using fabric backed by iron-on heavy weight vilene. Each strip was cut and overlapped on the stripe above. The silk tended to fray more than the cotton so in places I overlapped both edges. I did try normal seams for the strips and edging them in order to reduce the fraying, but the former was too bulky and the latter rather fussy and ugly. I used cotton floss in a matching colour to join the strips together. Having tried a few methods I used reverse applique by cutting tiny windows in the strips and backing the gaps with small pieces of different coloured fabric. I other areas I used small blocks of satin stitch or star shaped stitches. 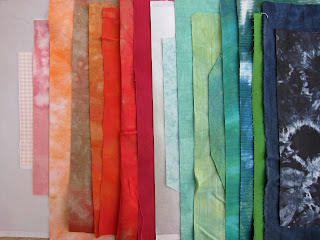 So now I hand dyed a range of cottons, linen and silk satin to the required colours. I also used a couple of bought fabrics in order to complete the colour range. This is a selection of fabrics used. 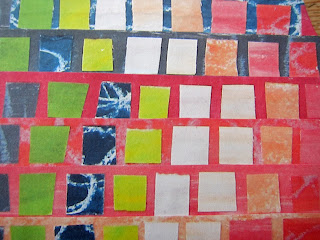 Well at last I have finished the 3d project agreed with Sian at summer school! I have continued with the idea of a pyramid but changed the surface design and worked out the technicalities. I liked the colours from my colour study and the stripes of colour, plus they reminded me of the Mayan pyramids in Mexico which In was lucky to visit as a child. I made a mock up in card and paper to look at the idea and liked it! I decided to change the order of each stripe and square on each of the 3 sides and chose not to have the stripes matching at the sides in order to make the eye stop to look. I lined the pieces with dark blue and liked the way this showed as an edge along each piece. Sian was happy with this so I set about making it up in fabric.
Posted by Paula Smith at 06:52

Hey you, what a beautiful piece...I just love it. No wonder you've been quiet for a while! must have taken patience to make your amazing pyramid. Well done Paula x

Totally stunning - you have worked so hard. I would love to use this as a jewellery box - a little surprise everyday. Hope you are well Keep up the fab work Julie xxxxxx

It looks wonderful Paula. The colour changes are lovely throughout the pyramid sides. Hope module 2 is going well!

Hi Paula, I like your new look blog. Your pyramid is beautiful. I love the colours. What a great idea to have the smaller pyramids inside.

What a wonderful idea and beautifully executed, as an old tutor of mine was fond of saying. The colours are lovely, just perfect for a chlid's memory toy , it put a smile on my face when I saw the opened pyramid with the baby ones inside.
Thanks so much for dropping in on my blog.

Absolutely glorious! AND I was interested to see how you thought through each stage. Very inventive and a lovely piece.

Hi Paula, your pyramid is a really successful piece, well done! I love the colours and the concept. 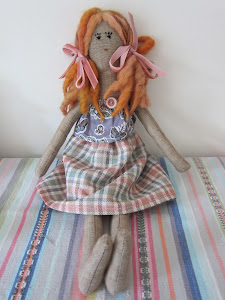 Paula Smith
I love embroidery and all sorts of other arts and craftsand I am trying to broaden my interests and skills all the time!